Foil kiteboarding has become really popular lately. I couldn’t believe it if you would ask me about it 11 years ago. My first kite foil board Mallorca kite school.

It is easy to fall in love, get dazzled by someone, it is also possible to fall in love with some things … All great love encloses a passion for the absolute, for the different, perhaps the radical, the magical …

Back in 2006 I fell in love with a kiteboarding board, actually a foilboard, to be more precise. The foilboard was built far away from Spain. The guy who produced, manufactured and sold it was Carafino a Polynesian fellow, Carafino lived in Hawaii. 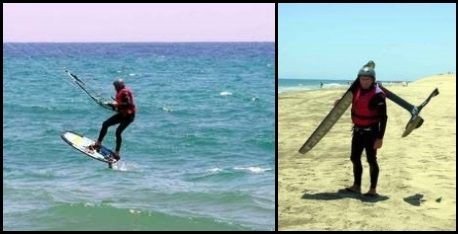 After contact him and agreed on the price, I ordered the board to be sent to Gran Canaria, where I lived by then. The truth is that as sometimes happens in romantic situations between humans, my infatuation for foilboarding
did not materialize to its logical conclusion.

What I mean by this? … I was not faithful. Yes, sorry to say it, Foilboarding did not convince me much, so, as happen so often in life, the board was relegated to oblivion in a corner and stayed there for quite long time.

Some years after I moved to Mallorca, the board made the trip with me more than anything, just to see if it suddenly would rekindled my old crush on it, by not leaving it behind, most of all, to be honest, because I had paid 1500 dollars for it. 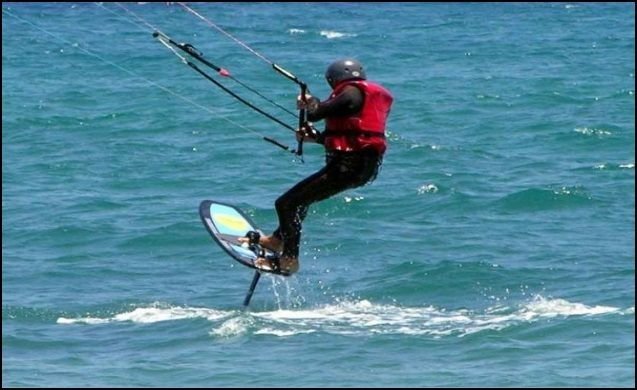 One day, talking to Ruben, the kitesurf shop owner of El Niño, he told me he was excited to try a foilboard, so we made a swap, he gave me his raceboard, a Monaro Airush and I gave him my Carafino foilboard.

In the end, I did not became very fond of the raceboard neither. I saw Ruben a couple of times trying his new foil toy but not with much success, until … the other day 5 years after our trade when, in the distance, near the area of ​​Es Barcares, I witnessed an orange kite and under it a guy riding a foilboard.

Surprise among surprises!, suddenly, I recognized my old Carafino foilboard. I watched his rides, I took a few pictures and here is this mini story for our blog.

I’m glad to see that, finally, justice has been done and someone has had enough patience and perseverance to juice it and … to have fun with the foilboard device.

It is something like when, one day, by chance, you see an old girlfriend of yours down the street, with his new love and looking happy.  I must be one of this that, instead of wishing her bad, perhaps as a consequence of my sense of cosmic order of things, the scene, made me really glad, deep on my soul.