Since the beginning of its activity ten years ago, the kite club has seen pass by our kite spot to many people interested in kitesurfing. Many of them, once they learned, continued to be in contact with the club.

Others because Mallorca is a tourist destination and there are many people who develop their work in companies that also have other tourist destinations among its range of services, they went to reside in other places, although since their arrival a bond of friendship and camaraderie was created that currently exists, even though many of its initial partners are already far away from Mallorca.

Marta is a nice and sporty young woman who had always wanted to learn kitesurfing. During several winters she had already worked as a ski instructor in the winter sports ski station on southern Spain in Sierra Nevada – Granada.

After joining our kite club, and after a couple of days of lessons, Marta has achieved an amazing progression.

The next kitesurfing  photos shows our dear Marta on her firsts waterstarts.

I must admit that Marta is a very skilled girl and it has take her really little effort to learn kitesurfing.

This few lines be an homage to Marta and let’s hope to have many more new members next summer which, besides enhance and enlarge our kite group also embellish the kite scene, undoubtedly … 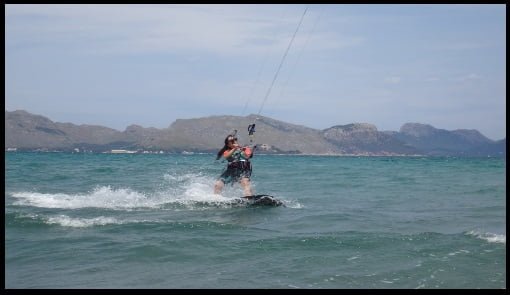 We want to profit this entry to our kite blog to mention that every year in the 8th of June, since 2009 it is celebrated worldwide the World Oceans Day, which is a great opportunity, how else?, to celebrate kitesurfing too.
Mallorca is an island, water all around it, beautiful clear blue water … inviting us to practice or learn kitesurfing.

Oceans and seas generate most of the oxygen we breathe thanks to the great photosynthetic activity of phytoplankton, also it is known that oceans absorbs a large amount of carbon emissions, which is helping its acidification. The oceans offer us food and nutrients and also regulates the climate.

Oceans cover approximately 71% of the earth’s surface, which amounts to an area of ​​361,000,000 km². Oceans have an average depth of 3,900 meters. The deepest point lies in the Marianas Trench. It reaches 11,034 meters deep in a place known as the Challenger abyss.

How much water is on the sea?

It seems impossible to calculate how much water is in the seas and oceans, but some scientists have estimated that the oceans has 1.370 trillion liters.
Of all the water we have on the planet, 97% of it, it is salty and it is found in seas and oceans. The sea currents, waves, tides, etc, keep the seas in continuous movement, this serves to oxygenate, transport food or distribute the energy that oceans store. Although we often talk about different oceans and seas, they are really all connected and united.

What else to say about oceans? … oceans are economically important for countries that rely on fishing and other marine resources for their income, also for tourism, countries such as Spain

World Oceans day motto is: “our seas and oceans are our future.” On this post entry we are going to add one more important fact: oceans and seas are the perfect background also for our beloved sport … kitesurfing!