Yesterday, in the Bay of Pollensa, we had the opportunity to test the brand new Flysurfer kiterace, the SONIC FR. SONIC FR – Test Mallorca kiteschool.

We had thermal winds divided into two stages, a first, 12 knots with ups and downs, lasting about an hour, dropping to barely 5 or 6 knots for an hour, picking up again to 6 to 10 knots and returning to the previous 12 knots again for an hour until wind died slowly.

The SONIC FR size at our disposal was the 15 meters.During the test we used the boards Radical L 2015 and the XL 2014.

First thing you notice is how long the SONIC is in reference to the narrow shape of the kite. That offers a very different look to what we are used from flysurfer foils so far. The cells are much more numerous than on the Speed 3 and 4 models. The leading edge has the reinforcements on the leading edge profile which had the early deluxe models of the Speed 4 on the 8 and 10 meters. The fabric is deluxe cloth and the appearance of the kite it’s very attractive.

SONIC FR in the air Mallorca kite test
As on the beginning of our test the wind was barely 6 or 7 knots and our beach does not offer much space, with algae and posidonia scattered all along the shore, once we closed the single central cell velcro for emptying the kite of air, we lifted it in the power zone by helding the kite tips. It went up and filled with air in few seconds, thanks to the multiple fill-in valves, in fact it filled in half the time or less than the Speed 4 had filled.

Once up in the air, and looking at it from below, it has this “RACE LOOK” feeling due to the high aspect ratio and race oriented profile, until you realize that you are under a real race machine. Do also notice the minimum thickness of the briddles and lines, as we have never seen before.

Immediately, despite the very light breeze blowing at the time, the kite propels you, so that, when it seemed that there was barely enough wind, you find yourself happily catapulted forward, edge your board and start riding.

Thereafter, steering the kite progresively you will find it extremely agile in turning, offering an unexpected fast steering and a surprising propulsion for its size.

In few seconds, you’re planning. I was a bit amazed, I must admit, of how things were developing, for, after a while, find myself well offshore really upwind and riding unexpectedly fast.

After five minutes riding, you are so upwind as no one could have imagined, as the faces of those who have been watching you from the shore testified at your return.

And to the latest qualities you have to add when attempting the jump, you notice immediately that, despite these barely 10 knots, the kite boost you up as it could be expected if they were blowing three or four more knots. With not only a great boost, but also a formidable hangtime. 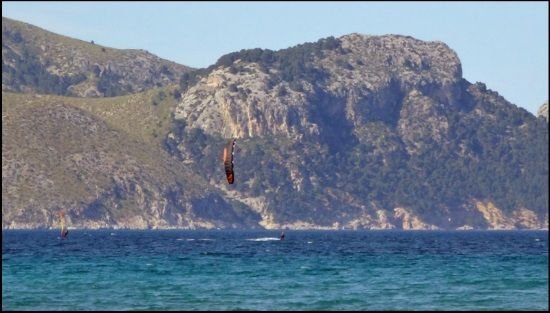 One more thing to say, the kite acted quite forgivingly because even when sometimes there was so little wind that was unbeleivable that you could keep going, when changing the kite of side in the wind window and despite the agonic steering movements on the kitebar to keep having some power in the kite, the kite didn’t enter into backstall but responded in the best possible way to retake power, after a couple of steerings, almost as if the kite understood that you had to keep going forward, even when it seemed that you were about to sink and the whole thing was over.

We were 3 people who tested the SONIC FR. I, specifically, was the one who had the worse luck with the wind intensity because in the best moments I enjoyed 10 knots, most part, there were as little as 8 knots.

Video of the SONIC FR riding in 8 kts of wind

My opinion: An amazing kite, tested in almost marginal wind conditions in which, at first, the kite got you shyly planing to find yourself 15 seconds after in what I would describe as the greatest ride upwind in my kitesurfing experience.

Very soft and direct bar feeling and behaving very quick in turns as if it was a 12 meters instead of the 15 mts kite race it is. When waterstarting, and as you dive the kite, you’re sent forward, even in the slightest breeze, delivering instant power, the sort of power delivery you would experience if you were giving gas in a motorcycle.

If the wind had accompanied with some more knots we could have had a more accurate test, but, in that case, what now could be described as: an unexpected and very satisfactory test could had reached, most certainly, the category of epic.