During the winter months, Mistral winds (NW) and Tramontana winds (N) are the most frequent winds in Mallorca which blow alternating with S and SW wind directions.

From middle of March the first thermal winds are starting to blow, shyly, mostly in warmer days.
With the arrival of good weather thermals become more and more frequent alternating with the influences of some possible high and low pressure areas affecting the Balearics mostly during Spring season.

The end of August generally marks the beginning of the end of thermals, being September and October months of absolute unpredictability.

Weather is summer like and temperatures oscilate between 22 and 35 Celsius but nonetheless the thermals become scarce and if any they start blowing not before 14h and just for a while, stopping after barely one hour of light breeze and generally not returning anymore for the day.

Wind and weather in Mallorca

In the months of Juny and August on the SE coast between Cap de Ses Salines and Capdepera the predominant winds are of component S.
Those known as Xeloc wind SE, Mitjorn wind S, and Llebeig wind SW.

On the NE coast, between Cap Formentor and Capdepera dominate the NE wind.
On the NW coast they are variable and in the SW they oscillate between variables and SW.

In the following websites you will have the chance to check some of the different webpages about the wind conditions and forecast in Mallorca.  Some of this webpages also offer webcams at different beaches of our island.

WEBS OF WIND IN MALLORCA 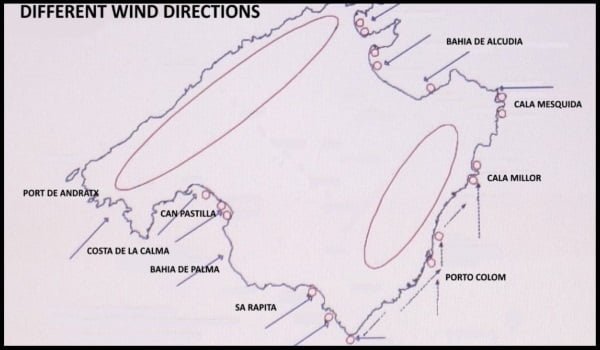