On the next lines we are going to see some peculiarities about the air, the wind and how are the most frequent winds which affect our country. Wind in Spain.

Air weighs … and so does atmospheric pressure. A cubic meter, by instance, an space of 1m x 1m x 1m of dry air at 20ºC and at sea level weighs 1.205 kilograms. Fortunately we are accustomed to bear over our shoulders a weight of 20,000 kg, without any harm because of it.

This happens because of the pressure exerted by the column of air of 300 km of height on top of us. We don’t notice this because we do not only receive this air pressure from above, but from below and even from within, getting it all balanced in that way.

Cold air weighs more than warm air and moist air more than dry air. This greater weight translates into higher atmospheric pressure, which is physically defined as the weight exerted by that column of air per unit area.

It is a magnitude that helps us to understand the movements of masses of air in a much more graphical way than for example temperature or humidity. 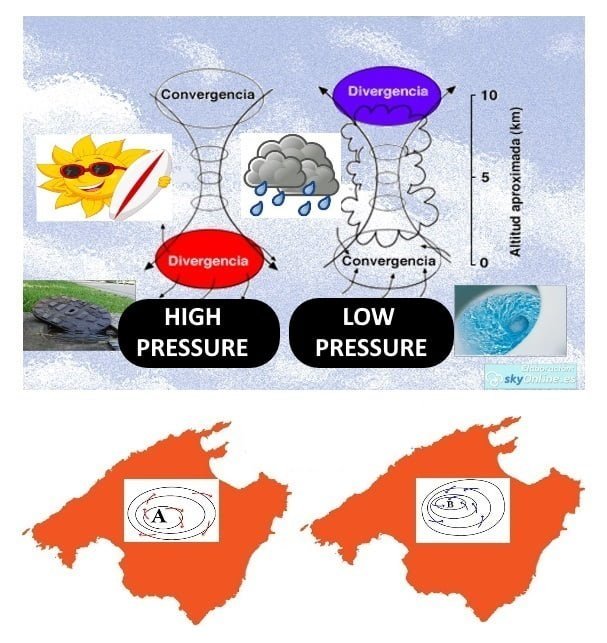 A High Pressure Area is a kind of inverted spring,  in the High Pressure Areas we have a column of air that weighs quite a bit and slowly expels part of that air at its base, while on a Low Pressure Area all resembles more closely to an inverted sink, this low pressure center absorbs the air to make it rise as what happens on a chimney. All that implies descent of air equals tranquility, whereas the ascent of air favors bad weather.

The differences in pressure

Air flows from high to low pressure areas. The more pressure difference, the more flow we will have, and therefore, stronger wind. The high pressures are difficult to move and often only leave narrow corridors so that storms can circulate.

If the wind finds no physical obstacle on its path, for example when it travels over the ocean, it overcome the obstacles of pressure, bordering the high pressure areas.

The Galician coasts and the Cantabrian coasts are often a good example of such winds effect, but when the wind arrives on land it is with obstacles, that makes it go up or channel between mountain ranges, as an example of it on the valley of Ebro river.

Here is a chart of maximum wind gusts recorded in Spain, record by communities according to a series of data extracted from AEMET (some series span from 1938 to 2016). 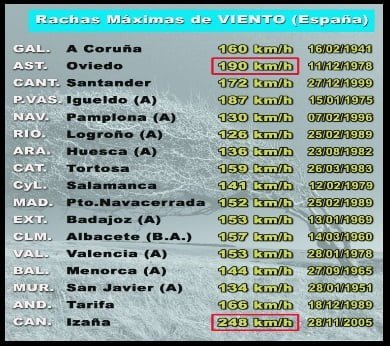 In addition, our latitude is affected by the Azores High Pressure Area. The northeast winds (trades) practically define the weather and the winds affecting the Canary Islands. Wind that it channels between this islands.

The High Pressure Area which has its center on the Azores islands, also favors the rising wind which is frequently channeled in the Sea of Alborán, and also having a closed and not excesively deep sea, as the Mediterranean Sea, this definitely has a great influence on the Balearic Islands and the whole Mediterranean basin.

It is expectable for any cloud front to end up generating a Low Pressure Area near the Gulf of Leon, which propels particularly intense northern winds to the north-east of Girona.
There is much more to talk about all this topic but the post is already long enough. 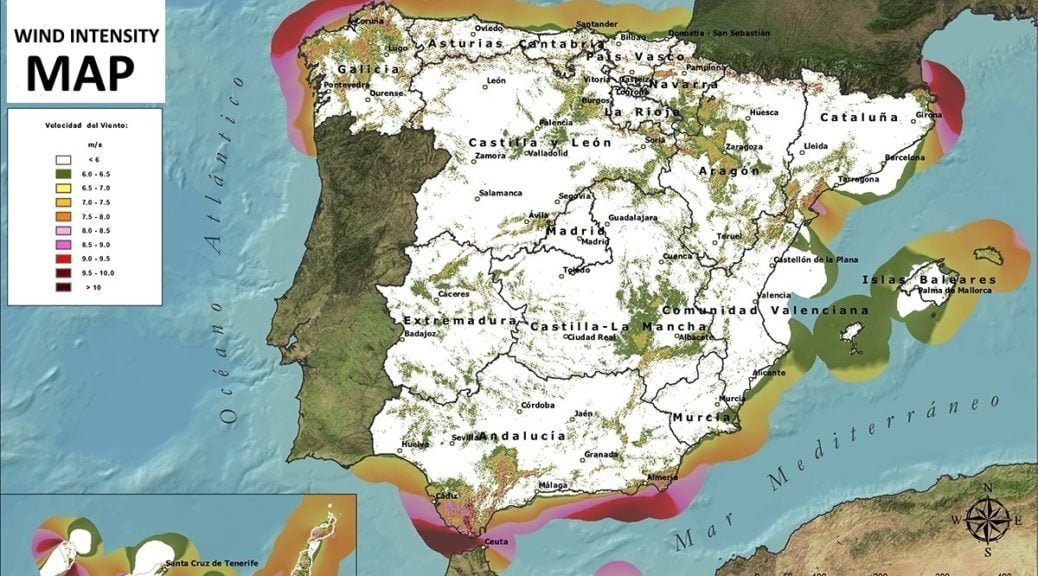 Unfortunately most of the data belong to capitals or airports and some strategic spots such as the Ampurdà or the peaks of the most notorious mountain systems are not displayed.

It is also interesting to take a look at the chart on the wind map on the first photo of this blog entry to confirm that the higher wind areas in Spain are in the northeastern coast of Galicia, the region of Ampurdà in Girona province coasts, in the Sea of Alborán, in the Strait of Gibraltar and on the islands, especially in the Canary Islands.

The most notable winds in Spain

The diversity of winds in Spain is so wide that in the blog “Thinking about the Territory” they have compiled a list with seven most famous of the country and its most characteristic elements. It is clear that they are not all that are, although probably the most famous.

1.- Ábrego: This mass of air of moderate temperature and relative humidity that can leave some rains in its path, blows from the southwest as it forms in the Atlantic, with currents of air near the Canary Islands and the Azores. It usually occurs mainly in spring and autumn. In Cantabria it is known as Castilian wind, while in Asturias it is called air of the chestnuts, since when it blows strongly it causes the fall of this fruit.

2.- Cierzo: It is a dry wind with low temperature, which is located in the Ebro valley. The Northwest component originates due to the difference in pressure in this area due to the combination of a Mediterranean and anticyclone storm in the Bay of Biscay Its speed can be quite high, with a historical maximum of 160 kilometers per hour recorded in 1954. Although its characteristic absence of humidity greatly affects life in the Ebro valley, it also suppresses the appearance of certain pests, which their existence is difficult under these conditions.

3.- Galerna: Due to its sudden and violent character, it is one of the best known winds of the Cantabrian Sea and the Bay of Biscay. It usually appears suddenly in spring and autumn, mainly on calm and sunny days. It is caused by the appearance of a front of cold air in which the wind suddenly changes direction. It is characterized by a sudden drop in temperature, which can reach more than ten degrees in a few minutes. In addition, atmospheric humidity rises to levels close to one hundred percent and the wind reaches gusts of up to one hundred kilometers per hour.

4.- Levante: Possibly, the name with which the wind from the east is known on the Spanish Mediterranean coast is the most repeated in any meteorological information space. The origin of the east wind is in the central Mediterranean, in areas near the Balearic Islands. It reaches its highest speed in the Strait of Gibraltar, where it leaves rains on the east slope of the mountains of Cadiz, before going down very dry, already discharged of moisture, and with high temperatures along the western slope.

5.- Poniente: Coming from the Atlantic Ocean, it moves from west to east. As it progresses, it gradually loses humidity and increases temperature, due to the Foehn effect. For this reason, it reaches the Levantine coast of Spain as a very dry and heat-laden wind. Although its presence in winter contributes to soften the temperatures, in summer it causes a substantial increase of the same, being able to become a risk factor for the appearance of forest fires.

6.- Terral: It is a wind of northern component caused by the different behavior of the land and the sea when absorbing atmospheric heat. Called thus mainly in the province of Malaga, the terral is generated when the solar radiation begins to diminish until it disappears completely. Since sea water takes longer to heat than the earth, there is a thermal contrast between the temperature of the surface of the earth, which has undergone rapid cooling, and the sea surface, which continues to maintain the heat absorbed during the day. The hot air of the sea surface tends to rise towards high layers and its place is occupied by the cold air dragged from the coast towards the sea. That flow is what is terral.

7.- Tramontana: Originated in the French Central Massif and the Pyrenees, it is a wind with a northern component that blows strongly over the Balearic Islands and some parts of Catalonia. Sometimes it can reach speeds close to two hundred kilometers per hour.