Among the basic concepts of static electricity and in reference to what interest us -kitesurfing- it is necessary to understand how things work so as to not discover another reason to end our kite session badly if could get hit by a lightning.

What I’m talking about is how we shouldn’t skip all the rules of common sense and ignore that kitesurfing in environments in which a storm is approaching our area and where static electricity may produce electric discharges, to practice or to learn kitesurfing it is definitely a very very bad idea.

Static electricity
how and why

Static electricity is the accumulation of electrical charges on the surface of an object. This occurs when two different materials are separated or get rubbed together, causing positive (+) loads collected in one material surface and negative charges (-) on the other surface.

The results of static electricity can be sparks, discharges which will produce this materials repelling each other, or the opposite, this materials will stuck together.
It is called “static” because there is no current flow.

When the air is humid, water molecules are collected on the surface of both materials. This can prevent the accumulation of electrical charges. The reason has to do with the shape of the water molecule and its own electrical forces.

This was clearly a dangerous experiment, and Franklin was lucky not to die trying.

What happens in an atmosphere
electrically charged

Static electricity can cause materials to attract or repel each other. It can also cause a spark to jump from one material to another. If there are sufficiently positive (+) electrical charges on an object or material and sufficiently negative charges – on the surface of another object, the attraction between the charges may be large enough to cause the electrons to jump the air gap between the objects. two objects.

Once a few electrons begin to move through that space, the air is heated, so that more and more electrons will jump through that gap or space. This heats the air even more. Everything happens very fast, and the air becomes so hot that it shines for a short time. That is the spark. The same applies to lightning, except on a much larger scale, with higher voltages and currents. 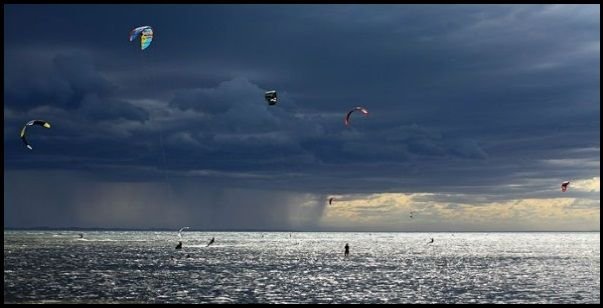 By rubbing some materials the accumulation of electric charges on its surface can be caused. Opposite charges attract and repel those of the same sign. Sparks are an extreme case of electrons that are attracted to an object that has a positive charge and jump through an air space between both materials, thus heating the air between them, for a fraction of a second.

A lightning has 27000 degrees celsius

An explanation of how static electricity is produced

A SELF LIVED EXPERIENCE

I personally had an experience in that respect, it was back in 1989 in the Dominican Republic, and it was windsurfing, in which, evidently, there is not a friction, much less as it can occur in the case of steering a kite up in the sky … in a storm, which, just thinking about it, and passing over the term: static electricity, already, by itself, can make anyone’s hair stand straight … if one considers what could happen to you. 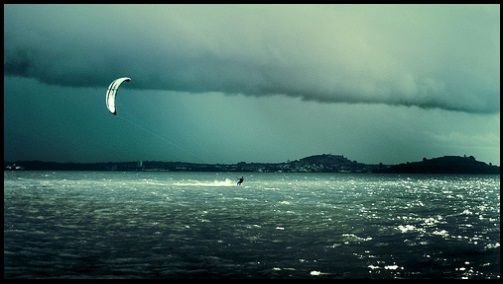 But going back to the Dominican Republic story, what happened is that, after sailing a good time with my race windsurfing board and my 7-meter blue sail (I can still recall the beautiful blue turquoise color of that sail), when leaving the water and heading back to the beach bar that was on the swimming pool premises, next to the beach in the Hotel Punta Garza, and leaning on the wooden counter of the bar, good mahogany or guayacan wood, I couldn’t tell, suddenly I received what I can not call other than: an “electric whiplash”, I mean, a discharge that pushed me backwards more than a meter away.

The surprise/shock was absolute, for the violence of it as well as for the unexpected. I recovered from the electrical shock momentarily and automatically I began to think: I must have leaned on an electric wire, but after checking around I couldn’t find any sort of wire, there was nothing on the counter, nothing except the mini water puddle that I had made to lean on, this and on the other side of it, the waiter who looked at me with total astonishment, as in that moment we were there just him and me, no one else near or around.

Timidly, I approached the counter again and, incredulous of me, I reached out and touched the wood. New electric whiplash, this time of less intensity but still remarkable.
I called my Dominican friends, and there we were doing experiments for almost 10 minutes, in fact, what happened was that during that time, I could not touch anything, really nothing or anyone, because at the same moment, I received the electric whiplashes, although what I would have touched was only with the tip of my finger.

In that case, what happened was that because though I could not figure out for what reason, I had charged myself with static electricity, electrons I imagine, and whatever I touched, in fact I touched also people (they received the discharge like me), I touched wooden parts from the bar, like the counter and the chairs, and I do not remember what else, but all I touched produced the same effect.

It is not necessary to be a very clever person to extrapolate some conclusions of what this may suppose when related to kitesurfing, and, although perhaps we will take over on the subject later in a future report and in a more precise way, I just want to remind everyone how bad idea can be to kitesurf to windsurf or even to navigate in storms and on electrically charged environments.

Electricity is more than just what lights a light bulb or charges your mobile phone or computer.
Electricity is everywhere around in life, what happen is that, somehow, we, humans, we have tamed it … Attention! only for our interest use.

Of the other electricity, of which it’s on the outside, in thre atmosphere, away from a swith which we can turn or torn off, although we can not see it, the ordinary citizen hardly knows anything.

Be very careful and do not repeat the experiment of the american physicist … you might as well end up with not so lucky results.

Is your name Franklin? … Is not, isn’t it? … Well, that’s it!   Read the signs. Do not tempt your fate and when there is a storm on sight or heading towards where you are, pack your kite gear and get back home. Think that even if you see a lightning bolt fall in the distance, even if it really seems far away, the next one could fall on top you. 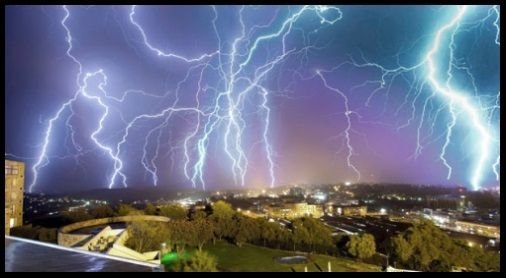 The statistics say that rays kill annually up to 2000 people in the planet. On Spain, the numbers are just 20, figure that even being smaller, it is worrisome. Do not provoke the electric currents on the sky by steering a kite in stormy weather and better do not to navigate on storms.

Lightning strikes are a real threat to kitesurfers