To practice kitesurfing in Playa de Palma or Can Pastilla it’s under your own responsibility. If anyway you decide to do so, be always respectful with other beach users.

Learning kitesurfing or receiving kite lessons, being those beaches the urban beaches of the city of Palma, it’s strictly prohibited. 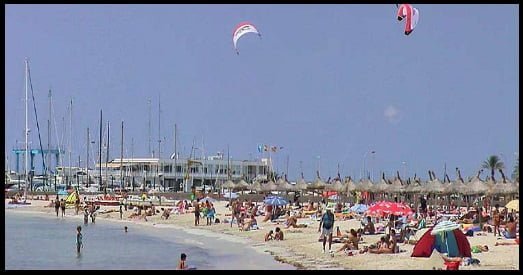 Photo of Can Pastilla on any summer day

Basically, even though you will often see some kite practitioners kitesurfing in Can Pastilla. The beach is not oriented to that purpose. Can Pastilla/Playa de Palma are beaches intended for the use of sunbathers and tourism in general.

Kitesurfing in Can Pastilla or Playa de Palma it’s only permitted by making use of the water channels designed to go out or come back to the beach.

This water channels are not specifically designated for kitesurfing but for the use of small sailing dinghies or small motor boats and the allowed speed within the channel is 3 mph.  Fines are of 3000 euros when you get caught by police authorities riding inside the buoys which are set 200 mts from the beach.

An interesting link about water channels and their use in Spain

Never kitesurf inside the marked areas. During tourist season there’s a line of yellow buoys all along the beach and until the last part of the beach in El Arenal, disposed at a distance of 200 meters from the shore. This is area designated by the authorities as swimmers area.

If you still wish to kitesurf in Can Pastilla we advice you to walk out through the water channel to start your navigation as fas as possible from the beach. Once you are kitesurfing or windsurfing on the outside, you should by all means stay at least 200 mts from the beach and don’t cross the buoys line.

Before arriving to Playa de Palma/Can Pastilla, the promenade that starts in Palma and runs parallel to the sea all the way until S’Arenal. During most of it, there is no sandy areas but rocks and in the areas where is sand, this small beaches, are also many swimmers, sunbathers and families. Making use of that beaches for kitesurfing purposes it is not possible.

What about kitesurfing there off season?

Above this lines two photos of the beach during off season.  Notice that  the beach on its most part is just 30 meters broad and during the tourist season is packed with swimmers and sunbathers.

From November until end of March the beach is mostly empty, only occasionally, some people walking on the sea shore.  At this time of the year, alternating with calm days, there are some storms from S – SE and SW. Many local kiters take advantage of this wind directions to kitesurf in Can Pastilla/Playa de Palma and El Arenal. 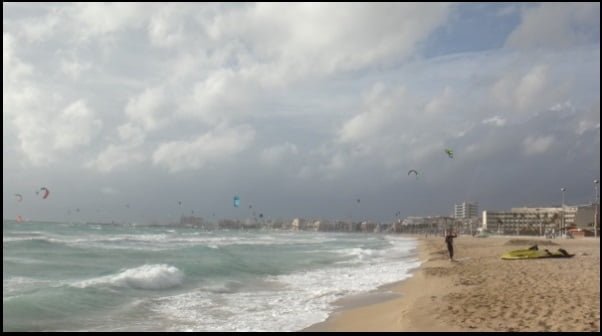 Though, evidently the law doesn’t make difference between seasons, during this months it is “permited” the practice of kitesurfing through all the beach.

In any case be always very careful, don’t surpass the limits of your kitesurfing level and remember that 90 per cent of days in which wind conditions are suitable for kitesurfing the wind direction is onshore or side onshore.

Avoid kitesurfing in violent storms. Can Pastilla – Arenal promenade it’s just few meters away from the beach and generally it is always quite busy with lots of people strolling.

Do you want to learn Kitesurf in Mallorca?
Book your course at best price: