To some extent and for your benefit, of course, any kiter must have an idea at least approximated of what the weather is like in his area. This blog post is meant to help. Mallorca kitesurfing and basic meteorology.

Your kitesurfing session is going to be unavoidably conditioned by the actual meteorology over the island. In Mallorca’s case, the best time of the year for kitesurfing regarding predictability is Spring ans Summer, due to the thermal breezes. Other than that there are frequent periods of calms mixed with the arrival of cold fronts arriving from the West and North bringing along storms, some of them clearly not recommended for kitesurfing neither for teaching.

We encourage you to visit Mallorca if for learning or practicing kitesurfing between the months of April and until mid September.

In principle it is interesting to know at least a little how to read a weather map, though on our TV channels IB3 and La Primera TVE1 every night there are exhaustive weather reports regarding all details about the next coming day.

They are lines that connect points with the same atmospheric pressure. We can have an idea of ​​the intensity of the wind according to the greater proximity between isobars, the stronger the wind the closer the isobars.

When in an area of ​​an isobar map, the pressure is higher than around it, we will find an “H or an A” that says there is an anticyclone. In this area there will be great atmospheric stability, the skies will be clear and no precipitation will be expected.

If the pressure begins to decrease at the point where they reach their minimum value, “L or C” appears. There is a low pressure or storm zone (also called a cyclone). In this case there will be greater instability and if it is given another set of conditions, it could also rain.

A front is the gathering of a mass of cold air with a mass of hot air, which causes atmospheric instability. This is one of the factors that influence the density of the air is the temperature and the masses of air are separated by a front, usually of different temperatures.

A cold front is a stretch of bad weather that occurs when a mass of cold air approaches a hot air mass. The cold air is denser and generates a wedge that goes below the warm air, which is less dense, which causes a decrease in the temperatures in the area and, later, rain or snow.

Cold fronts in winter in Mallorca can easily derive into snow in the mountains of Serra de Tramuntana, being also possible, though seldom, snow on the beach.

What to await in Mallorca meteorology

In a meteorological map, the fronts are represented by a line with triangles whose base rests on that line and whose vertices indicate the direction of movement.

Website of the different weather conditions of Mallorca daily
https://www.meteoclimatic.net/mapinfo/ESIBA?screen_width=1366

A warm front is a mass of warm air that moves to replace a mass of cold air, the last, receding.
In this area there will be clouds, but the temperatures will be milder and, in the best of cases, a weak precipitation can occur.

WARM FRONT IN JULY
The cause of this temperature rise is a mass of warm African air that has arrived from the peninsula. Due to this forecast, the entire archipelago is now on orange alert for high temperatures.

The area south of Mallorca is the one that will be most punished today. Yesterday was already a day marked by the heat: the maximum in Balears reached 39 degrees and the yellow alert was decreed, which today goes up one more step when rubbing the 40 degrees.

As usual Sa Pobla is usually the Mallorcan municipality that beats records of high temperatures every summer, today they will be nuclei such as Llucmajor or Campos (or even in the interior of Palma) which will see the thermometer go higher.

When will the truce arrive? Morning. This mass of warm African air will move and tomorrow the mercury will fall and give a break. The descent will be especially pronounced in the insular south, where temperatures could fall between three or six degrees

In the maps, the fronts are represented by small triangles in the case of cold fronts or semicircles in the case of warm fronts, connected by a line that extends along and extends in the direction of movement. 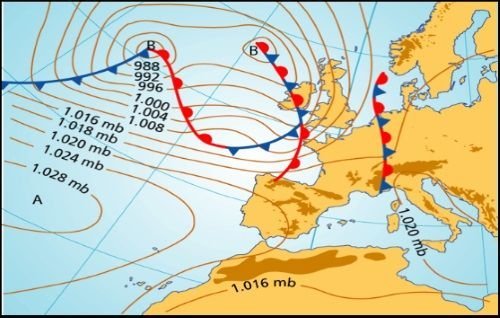 In the course of the normal evolution of a disturbance, the cold front tends to reach the warm front. We could say that it forms an occlusion and the warm sector that is increasingly pushed to higher altitudes

If a cold front reaches a hot front, an occluded front forms. When the cold front reaches the hot one, it gets underneath, like a wedge, forcing it to rise above it and separating the mass of warm air from the ground. These types of fronts are not frequent in the Balearics.

Any given day during thermal wind season in Mallorca 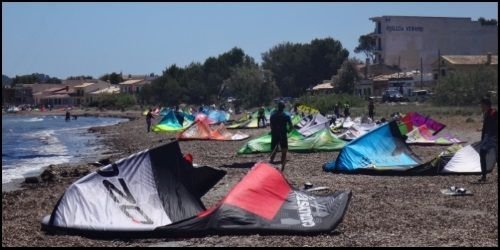 But for better outcome bring your big kite, just in case … 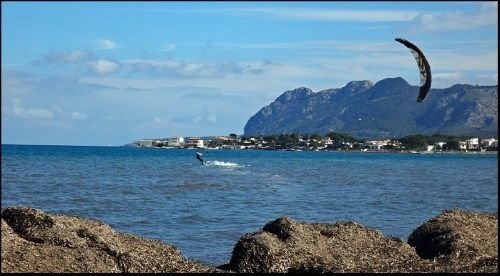