We can notice in Son Serra de Marina beach two different parts: The part which is next to the village and the other side of the beach which is at its eastern end, known as S’Estanyol

On this second part, on the eastern part of the beach, there is no beach surveillance, therefore you may succeed, if you try to kitesurfing there, considering that the beach there is rather narrow, there are peeble stones on the shote and the sea bottom may be rocky. 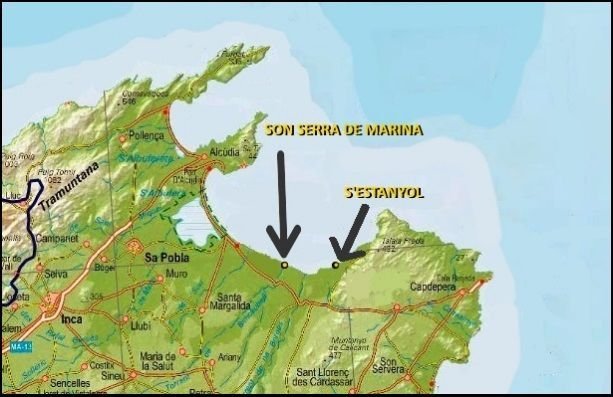 In the beach area near the village, the one that shows in the webcam on internet, there are lifeguards on the surveillance tower, therefore they have to care of beach swimmers and therefore the lifeguards will call the local police if they see somebody kitesurfing in that part of the beach as there’s not any water channel to leave the beach and return to shore.

If anybody wish to kitesurf in Son Serra de Marina has to understand it will be under their own responsibility.

The Spanish Law of Coast says:
On the first 200 mts from the beach, it’s forbidden any kind of navigation.
Once far out from the 200 meters from the shore there’s no problem to kitesurf there but if getting into the area inside the 200 meters, there’s an all year ban in all spanish territory.

If instead a sandy beach the kitesurfing navigation takes place in front of a rocky shore, the ban goes until only 50 mts on the outside. And must be noticed that. obviously the law doesn’t makes difference between seasons, that is summer or winter.

At any time of the year the law applies just the same. The particular thing … during winter season and in early spring or late autumm there is almost nobody on the beaches, therefore nobody should really cares to check about you if you are kitesurfing unless there’s a real problem.

View of the area. The breaking waves does over rock formations in the sea bottom making it, riding, a dangerous ride

Son Serra de Marina beach on its first part, the one with surveillance by lifeguards

Son Serra de Marina is the wave spot of North Mallorca. Waves can be really big, also because they break on a rocky sea bottom.

We could say that winds from the west are slightly side offshore, therefore are gusty in Son Serra beach.
As wind turn towards north is getting more constant and the same thing when coming from northeast. East winds are also gusty because the end of Alcudia Bay on its east side create wind shadows on Son Serra beach.

Two thirds of the beach of Son Serra de Marina it is considered a naturist beach starting from 3-400 mts from the village until the last part of the beach at S’Estanyol.

An anecdote about Son Serra de Marina urbanization is referred to a clause of the contract of purchase of the different plots in the area for those who wanted to build a house there next to the beach.

This was back in the seventies of the XX century. This was during the last years of the dictator Francisco Franco and his totallitary and ultra catholic militar regime.

That particular clause of the contract prohibited to swim together men and women. Currently nudism is practiced on 75 per cent of this beach nowadays.

The “possible non-fulfillment”, which was often monitorized by guardia civil forces involved paying for the offence -of swimmimg next to a woman- the expenses of 50 masses in the oratory of the estate.

Conclusion: Already then, 47 years ago, the beach was monitorized often by police. Time has brought changes, for good of course but: You wouldn’t want to be fined this time for something so -apparently- innocent such as kitesurfing, wouldn’t you?